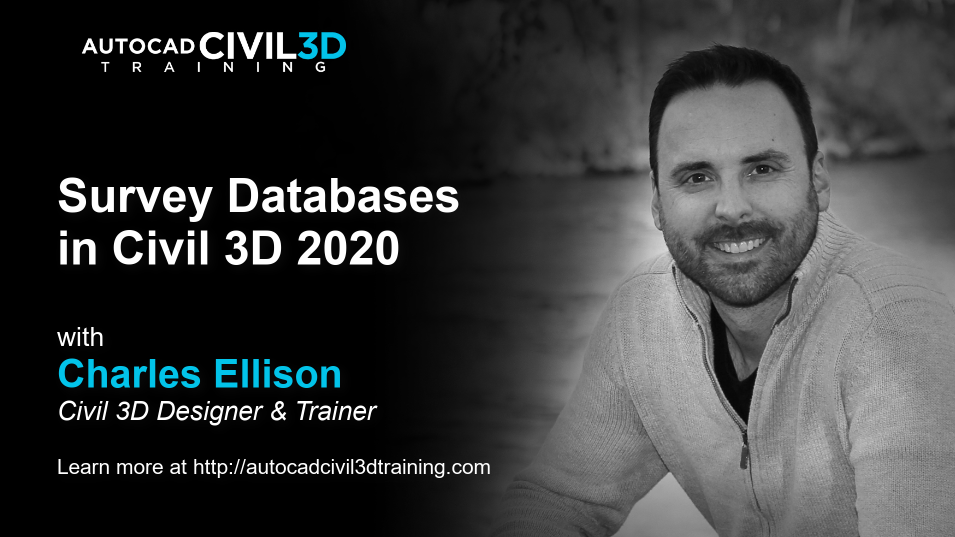 Hi, I’m Charles Ellison, Civil 3D Designer and Trainer at autocadcivil3dtraining.com. Today we’ll be looking at Survey Databases in Civil 3D 2020. Survey databases are used as a shared location for survey data and is kept outside of your drawing. They control how data is processed into points, linework and figures. Site data can change over the course of a project during construction. Survey databases allow us to add or remove site data as our site changes.

One of the benefits of Autodesk Civil 3D is that really all of the data is kept within the drawing. And then we can link that data between drawings, and we’ll find out later. However survey data is much more proprietary. And this survey data really needs to be kept outside of the drawing, and not editable to users who may be consuming that data, but not the ones who own it. This way provides additional options to work with this data.

So that’s where we’re going to look at some of the databases, the external controls for points, as well as figures or linework drawn from those points, using the databases that are connected with our survey tools. Let’s take a brief look at that. Those are found in our tool space. I’m just in a blank drawing here. I’m going to come to the survey tab of our tool space, and you’ll notice, there’s really four different databases, that are used.

The Survey Database, is really the database, that’s our main project database. That’s where the project data is going to be stored. It’s not going to be stored in a drawing, you can enter or have the project database information displayed in a drawing, but really the values that linework and those points are stored within the database. Then you have Equipment Databases. This allows us to utilize settings for the equipment used to make adjustments to the points as they’re brought in. So if I right click on just the sample database here, and say Manage Equipment Database, you see some of the settings that are available within the Equipment Database Manager, and locations, for example of your EDM, where your prism offset is, and the like. So I’m going to close that down. A lot of companies usually have already made adjustments before they import this into a CAD setting, or may use other means to translate this. So the equipment databases aren’t used as often, in companies that utilize Civil 3D in the survey.

The Figure Prefix allows us to control how the linework looks when it’s drawn. For example, what layer does it go on? What style is used? Because you’re drawing a Civil 3D object, what style is going to be used? And really even what kind of figure is it? There are a couple different types of figures, think of figures, is it a horizontal control type figure or linework? Or is it one that does have some 3D control to it, maybe a brake line? So all of that would be stored in the Figure Prefix Database.

So let’s go ahead and just open up the sample one, choose Manage, and you’ll see nothing there, but you see the columns, we are going to be creating or editing Figure Prefix Database in a moment, but you have the name of the figure, which is the point description.

Whether or not it’s a break line, in other words it is a, topography controls that you want on it, or whether it’s more of a horizontal control type linework, such as a lot line, what layer to put it on, what style, and we’ll talk about sites later as well. I cancel that as well. And finally, the fourth database is called Linework Code Set.

In other words, should a figure be drawn, how does it know when to start, the line and end the line? How does it know if the line is supposed to go from a line to more of a curved nature? When does the curve begin and end? What is a point on a curve? Then how do you close rectangular?

All of these different things are controlled by the Linework Code Set, and a right click on the sample as well and choose Edit, and you see all of the different coding methods, that can be set, in this database. Now these databases are not drawing specific, and they’re located at different location in our setting.

And if you notice, as I floated over one of these, it’ll actually say where they’re located, the path of that Linework Code Set, by default when we create or install Autodesk Civil 3D. But maybe we want to set that to another location. You have some buttons up here that allow us some control. For example, you can choose the button on the far left called Survey User Settings. And within the Survey User Settings, you can define where to store the Survey Databases, where the Equipment Databases would be stored, where the Linework Processing Databases would be stored, Linework code sets, as well as the Figure Prefix Database code sets, which ones would be the default databases to use, and some other values that you can set per user.

In other words, once you’ve defined or installed or deployed this, this would be per user. Companies who are actually creating deployments for the software can set this in their deployment. And so it’s recommended, you would have this set to some shared location, so that you don’t have a different Linework code set from the surveyors working next to you. How does all of this work together to draw our Linework and import the survey data into a drawing? Well, let’s see that in our next video.